Early in the hockey season, 15-year-old Nick fractured his left index metacarpal at the neck during play. He was in the short corner defending a penalty when he was hit on the top of his hand by another player’s hockey stick. Nick plays Men’s-grade field hockey and was frustrated to be laid up with an injury during the season.

But this type of injury is not uncommon. Although field hockey is classified as a non-contact sport, acute injuries often result from contact with a stick, the ball, another player or the goal cage. Players aged 10 to 19 years account for 50% of all hockey injuries, mostly in the 15-19 year age group. Hand fractures, especially in the fingers are common, given their vulnerability to contact with the ball or opponent’s stick.

Nick’s radiographs showed an extra-articular fracture with no malrotational mal-alignment or extensor lag. He was immobilised in a POSI (Position of Safe Immobilization) splint and buddy taping. Nick was eager to return to sport ASAP so he began using the Osteotron IV, a bone growth stimulator which uses low-intensity pulsed ultrasound (LIPUS).

The device was strapped to the injured area for 20 minutes a day at a setting of 1000Hz at 30 mW/cm2 intensity.

Nick was reviewed by his orthopaedic surgeon at 4-weeks-post-injury, who was pleased to report callus formation. Nick was advised he could remove his hand split and return to hockey with a smaller splint given the promising healing that had already taken place. He also continued with the Osteotron IV.

At two months, Nick’s films showed his fracture had united both clinically and radiologically. Nick was able to return to all normal activities including finishing the hockey season.

It is estimated that 15% of hockey players are injured during a single season, and that injuries cause players to spend 11% of the total hockey season playing at less than full capacity. The Osteotron IV bone growth stimulator offers players an option to facilitate their healing and get back to the sports field or court sooner.

Because these injuries are often a one-off, Medi-Rent’s option to rent a LIPUS machine is an affordable option to facilitate bone healing.

To find out more about the Osteotron IV click here. 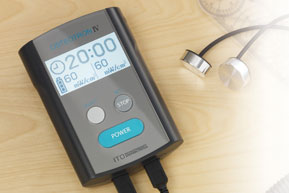 Didn’t find what you are looking for?

Our service representatives have a detailed understanding of each of our products. Give us a call if you still need help with product set-up.